This page is updated by both the Human Rights & Equity Committee members and the Communications Officer.  If you have something that you would like to be added, please contact commofficer@cupe728.ca

The Human Rights and Equity Committee shall consist of not less than three (3) members.  This committee shall strive to achieve and maintain the following objects:

a) To promote a solid understanding of human rights
b) To promote the principles of equal rights and equity from a union perspective.
c) To encourage recognition of an action that would eliminate stigmas, stereotypes and other barriers facing minority groups.
d) To involve as broad a cross section of people as possible in any and all union and community endeavors.
e) To promote fair and equitable treatment for all.  The committee shall work in conjunction with CUPE BC and CUPE National in order to achieve the above goals with the utmost efficiency and timeliness.

IMPORTANT DATES IN MAY

Suggested disclaimer for end of post: “If there is a holiday/event that you would like the Human Rights & Equity Committee to discuss or highlight, please email details to office@cupe728.ca” 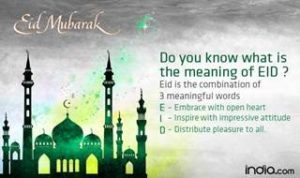 Whether you are Muslim or not, the celebration of Eid-al-Fitr is acknowledged around the world by many of all faiths. Eid is a time for blessings and joys throughout the Muslim community, but because it is a day of charity, it is a day to distribute one’s wealth.  Eid-al-Fitr is a direct translation of “Festival of the Breaking of the Fast.” Eid-al-Fitr is actually a three day long celebration after the end of Ramadan everyday from dawn to dusk. Unlike other celebrations, Eid doesn’t fall on a fixed Georgian calendar date. The date of Eid varies in accordance with the Islamic lunar calendar: if the crescent moon isn’t seen, Ramadan will go on for another day. If it is seen, Eid Mubarak!

How does the day begin?

Celebrations begin at a specific Eid prayer, in mosques, surrounded by your families and friends that you typically see during the month of Ramadan. After prayers, everyone congratulates each other for the ending of this blessed month. Usually, next is the visiting of graves for your loved ones after the conclusion of Eid prayers, to clean the gravesites and dawn the graves with fresh flowers.

How do Muslims celebrate?

Muslims wear their newest clothes or their finest clothes. Muslims decorate their homes with Eid decorations, lanterns, and twinkling lights. Everyone makes special foods for when their families and friends are invited over to come celebrate alongside. Muslims visit their relatives’ homes, as a way to celebrate with their loved one.

Hands are covered in henna patterns, from the nights before that were served as preparation for this three-day long period. Gifts are given to children and those in need, which are commonly known as Eidi.

For more information check out What Is Eid? All You Need To Know About The Muslim Holiday – Muslim or What is Eid? Why Do Muslims Celebrate This Holiday? – Islam Faith

February 14, May 5, and October 4th are significant days to mark on your calendar. The common theme is awareness and commemoration of the MMIWG2S+ (Missing and Murdered Indigenous Women, Girls, Two Spirt and Non-Binary People).

Yet we have 3 days to commemorate Indigenous women, girls and two spirit people who have not returned home and come into harms way. Why is that? Why do we need 3 days?

Shelley and Theresa, both from CUPE 728, Surrey Schools and members of the CUPE BC Women’s Committee acknowledge this national tragedy that Indigenous women and girls are 12x more likely to be harmed. They agree to learn the truth together and make change where they can, Shelley as an Indigenous Activist and Theresa as an Active Ally.

We started by learning about the Red Dress Project. Jaime Black is a Métis and Finnish artist based in Winnipeg who created a Red Dress Art Installation in 2010. She was inspired by a demonstration she saw in Bogotá, Colombia, where a group of local women wearing red dresses gathered in the capital’s public square to honour, support and grieve people in their families who went missing. Jaime created an art project by hanging red dresses to draw attention to the MMIWG. These dresses are hung in high traffic areas to highlight the epidemic of violence against Indigenous women. You can learn more about Jamie by scanning the QR Code at the end of this article. Jaime’s Red Dress Project has spread across Turtle Island.

Asked what inspired them to plan and host a Red Dress event, Jodi responded, “The injustice and atrocities that Indigenous women and two spirit face in the downtown eastside, where there is a lack of any action by the law. I wouldn’t hear from my daughter for months or even years, and I had no idea where she was. I experienced racism firsthand, when making missing person reports, or calling when a body was found to see if next of kin was notified – no one cared. I wanted to create a Red Dress Event to bring awareness and make a call for change in laws – Laws need to be toughened when it comes to harming Indigenous women, children and two spirit people – it should be a capital offence and then maybe genocide will end. Still sadly we have a long way to go.” Louella responded, “We wanted to draw attention and educate our community to what the Red Dress Event represents. The Red Dress hanging in trees speak to everyone – they speak to me, they say, ‘Don’t forget me, I’m here. Sometimes they say they feel lost’.”

At the 2019 inaugural HEU Red Dress event, The BC Federation of Labour Indigenous Worker Representatives, Shelley Saje Ricci (CUPE 728) and Joulene Parent (ILWU International Longshore Workers Union) were asked to make speeches. Theresa recalls Shelley asking their local 728 if they would like to have a tent and share in the event. And so, HEU and CUPE 728 began this partnership to host Red Dress events on or around October 4th at Bear Creek Park.

Three years later, CUPE 728 Surrey Schools is looking to host its first Red Dress Event on May 5th at Bear Creek Park in collaboration with HEU. In the spirit of active allyship and encouraging CUPE men to “walk the talk” our event will invite and make space for allyship from the male union leaders to speak up and show support. May 5th is the National Day of Awareness of Missing and Murdered Indigenous Women and Girls, also known as Red Dress Day.

Active Allyship is one way to support Indigenous people who represent less than 5% of Canadian population. Theresa has been working toward allyship for the past couple of years and has some tips based on her path toward becoming an accomplice and co-resistor (terms she learned from the Indigenous Ally Toolkit by Dakota Swiftwolf.)

Shelley: What are your motivations to be an Ally? What is the first step in being an Active Ally?

Theresa: My husband is Metis, my daughter is growing up Indigenous, I’m a settler, but I’m invested. My first step is that I began to learn within our local, through Indigenous Activists, like you, Shelley, and also Debra Merrier and Nora Hooper. I learned that I need to show up at events such as Red Dress Gatherings and the February 14th Women’s Memorial March – I learned by being part of conversations and listening to the stories. I acknowledge I am a guest on this land, and there are many diverse nations, I need to respect this diversity and not assume every nation is the same. In the toolkit, I like the words accomplice and co-resister (how to be more than an ally). I want to help stop systemic racism and be a part of the change to polices and the structures that promote this. I want to become more involved and learn about the issues and help influence the system into making those changes.

Shelley: What are some ‘privileges’ you have that directly affect and empower active allyship for Indigenous people?

Theresa: I know I can use my privilege to get others to listen, I can push to have indigenous people at the table within our local, on committees, labour councils, etc. I can consult with Indigenous members before making any decisions that affect them. I can amplify their voices; I can step aside to create space and be mindful of their needs and perspectives. I can remind decision makers to run decisions through an equity lens, asking “how will this decision affect Indigenous, 2SLGBTQI, Racialized and Workers with Differing Abilities?”  Lastly, when I show up, I will offer to help, using my time, resources, and skills.

Shelley: What can people do to get involved? Where can they go for more learning and resources?

Theresa: You can show up to events. You can host events. Find out whose land you’re on – native-land.ca, read the reports in the links below, invite Indigenous activists to the table for conversation and to events to speak about issues that are important to them. Begin taking some of the 21 challenges by searching #next150. Watch films, Ted Talks and documentaries, Watch APTN – the Aboriginal People’s Television Network, especially the news at 8pm. Finally, in allyship, talk less, listen more.